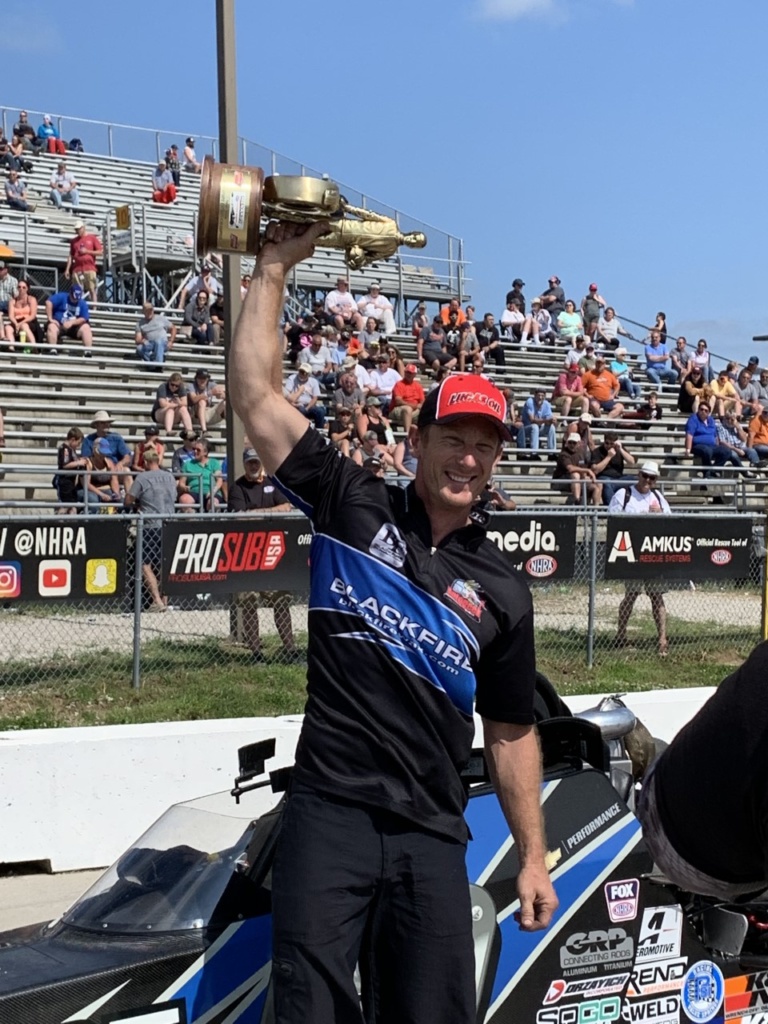 In the three weeks leading up to the 2019 NHRA Heartland Nationals in Topeka, Kansas, Bruno Massel was hardly sleeping. Between filming Garage Squad and hosting various NHRA events around the country, every extra second he could find went into readying his COPO Camaro and competition eliminator dragster for the big day. At his Illinois shop, Massel was busy swapping motors with help from fellow Garage Squad cast membersers Cy Kellogg and Ronnie Gregurich, adding all new wiring and a new engine management system to his dragster. Every last detail had to be checked and rechecked in preparation for the races. The 15 hour work days took their toll, but Massel says nothing was going to stop him from running the race on the 10 year anniversary of his first NHRA win at the same event. 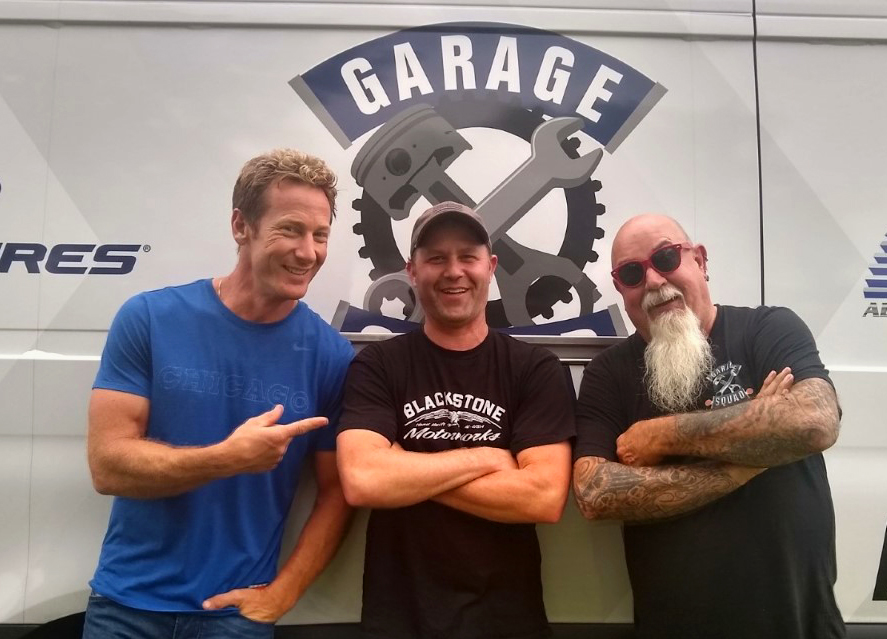 Ronnie and Cy helped Bruno get his cars ready for the Heartland Nationals.

Coming off a disastrous 2018 season that saw a lot of wasted parts, time, money and effort, Massel was ready to get back to winning. With the cars prepped in the nick of time, he loaded them into the trailer the Thursday before the event. Massel, his wife Dayna, and their two sons piled into the truck to make the trek from Illinois to Kansas. Just two miles down the road the tow rig suffered wheel bearing issues that brought them to a halt.

“My wife at that point said, “Maybe we should just call it quits and not even go,’” Massel says. “I told her, ‘We’ve come this far, I have to see it through.’”

It was the first of many hiccups the weekend would bring, but Massel’s never-give-up attitude would keep him on track, literally and figuratively. He replaced the bearing on the side of the road and the Massels finally hit the highway. They pulled into the racegrounds around 1 a.m. early Friday morning, about five hours behind schedule. Race day had arrived.

The roller coaster weekend continued when his COPO Camaro suffered a camshaft problem. Unable to fully address the issue on site, the Chevy could onlymake representative passes. Fortunately, Massel and the comp eliminator dragster ran in sync. 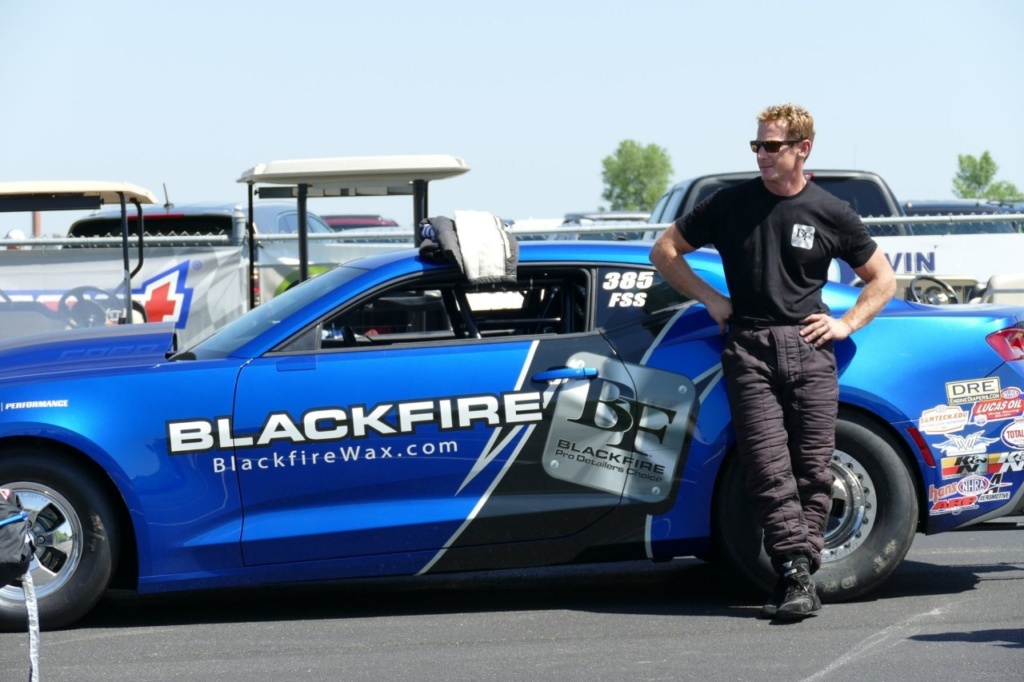 Bruno and his COPO Camaro.

“The best thing you can do for the car is be a robot and take the emotion out of it,” Massel says. “In situations where things are going wrong you don’t have to think about [your routine].

As he prepares for each green light, Massel goes through the exact same process over and over. He pulls his gloves on, dons his fire suit and buckles into the car the same way before every race. Some call it superstition, he says, but it’s about finding a method that works and sticking with it, because “if you vary, it throws everything out of whack.”

His procedures carried him through the weekend’s ups and down. By the semifinals, it seemed there was nowhere left to go but up. That wasn’t the case.

When lining up the comp eliminator dragster sponsored by blackfirewax.com for the semifinal race, the transmission dropped reverse. To get the car on its mark, the 1,400 horsepower turbocharged 4-cylinder engine had to be shut off so the dragster could be hand guided. Massel assumed his wife’s heart was skipping beats as she watched crew members push the car into place. She’d be on her feet seconds later because thankfully you don’t need reverse at 200 MPH. Massel blasted down the strip and earned a spot in the final.

The two-time NHRA champion was used to making upwards of 200 passes a season. In recent years Massel has been lucky to make 70. Going into the final on the 10th anniversary of his first win at the same track, his normal methods began to fail him. His heart rate was spiking and his breathing was difficult to control. 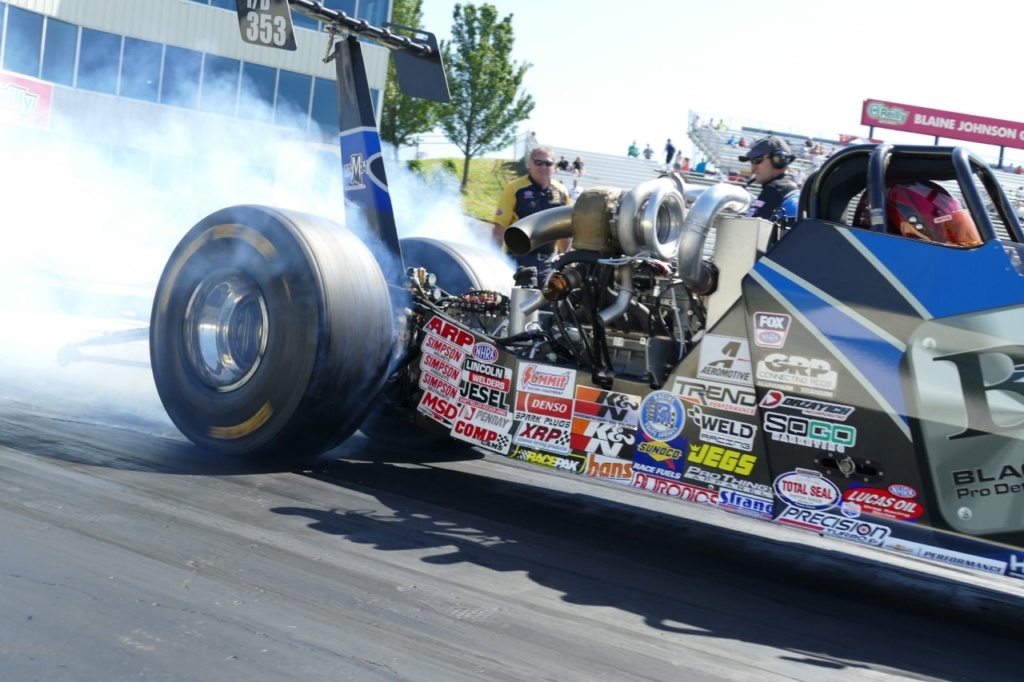 At the race 10 years ago Massel believes he was more confident. Leading up to that race he had several near misses and felt as if the 2009 Heartland Nationals were a win waiting to happen. Now he was in position to claim victory at the same event for the third time (2009, 2012), but the lack of wheel time had taken a toll on him. Facing a 45 minute mad dash to fix the tranny and get the car ready for a chance at victory, it seemed all would be for nothing. 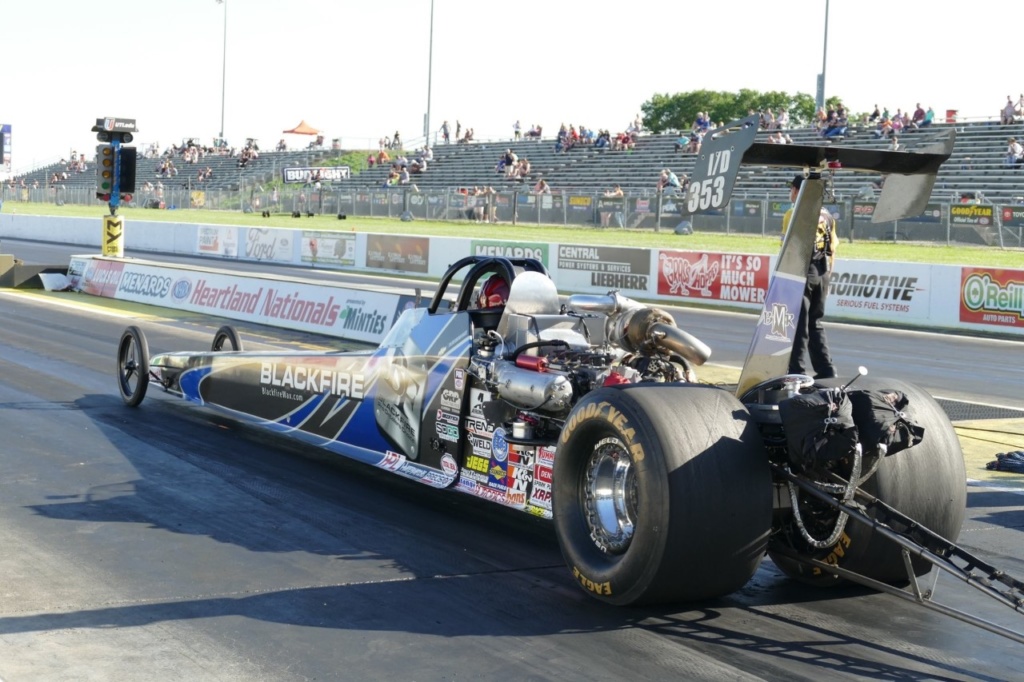 If he was going to have any chance of making it down the track,  he had to figure out someway to soothe his nerves. When Massel was a youngster, when his dad was the one behind the wheel of the dragsters, he spent some of his time practicing martial arts. In class he learned a breathing technique used to calm the mind. Though he hadn’t tried it since he was a child, this same technique now helped him focus. He credits this with helping him achieve his best response time to date as the tree lit up in that final race, just 5,000ths from perfect.

Massel and his dragster launched off the line with 3.4 Gs and hit 206 MPH in 6.4 seconds on its way to victory.

“After a year of missing badly, you start second guessing yourself,” Massel says. “So this race was reaffirming I can still get it done, I can still put a car together, I can still go out and win.” 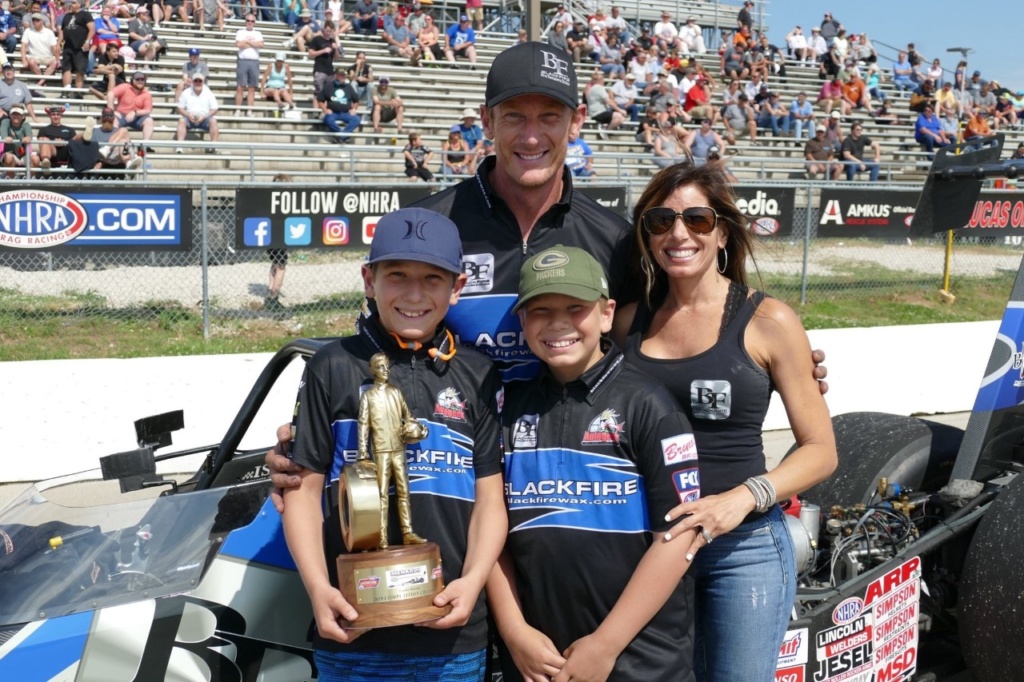 Bruno, his wife Dayna, and their sons after winning the 2019 Heartland Nationals.

At every corner and every straightaway, Massel faced a challenge getting to the Heartland Nationals. But he took home the trophy he came for. To him, winning is the result of determination and old fashioned hard work. Massel goes on to say, “When struggles come, you just have to keep fighting and fighting and fighting.”