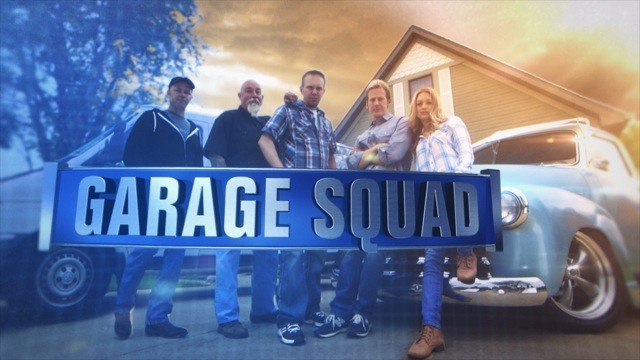 (Silver Spring, Md.) – Across America cherished vintage cars lay abandoned in driveways and garages because their owners lack the time, resources or simple know-how to get their autos back on the road. Amateur mechanics always start with the best intentions when acquiring a treasured car, planning to return it to former glory. Unfortunately, along the way, many weekend mechanics get in over their heads under the hood and are forced to put their beloved project on hold. This August, Velocity once again helps “project car” owners turn their half-done duds into ultimate dream cars with the return of the hit series GARAGE SQUAD on Tuesday, August 11 at 10:00 PM ET/PT on Velocity.

This season, the GARAGE SQUAD is responding to fan requests for much needed help completing their automotive endeavors. National Hot Rod Association (NHRA) driver Bruno Massel, lead mechanic Joe Zolper and new co-host Heather Storm bring expertise, parts and tools as they crash the garages working round the clock to transform cars. After working alongside the owners to ensure the perfect vehicular vision, the squad returns the completed cars to their owners for an emotional reuniting of man and machine.

“The stories on GARAGE SQUAD embody the perils that many vintage car owners can fall victim to: a lack of time, skills or funds to complete their dream project,” said Robert Scanlon, General Manager, Velocity. “Mark, Heather, Joe and the GARAGE SQUAD team fill those voids, helping turn the owner’s dreams into reality.”

In the premiere episode on Tuesday, August 11 at 10 PM, the GARAGE SQUAD helps Ryan breathe new life into his 1972 Oldsmobile Cutlass Supreme 442. The ’72 Oldsmobile has deep sentimental value because Ryan and his dad worked on the car together when Ryan was in high school, and Ryan even drove the car in his homecoming parade. With missing parts and misfit parts the GARAGE SQUAD is taking on their greatest transformation, and doing a little detective work as this car has a unique, hidden secret.

FEATURED CARS IN THE SERIES INCLUDE:

GARAGE SQUAD is produced for Velocity by Super Genius, inc. productions. For Super Genius, Mat Burnett and Bill Connell are executive producers and Ted Lega is director. For Velocity, Peter Neal is Executive Producer and Robert Scanlon is General Manager.

Velocity, a division of Discovery Communications, Inc. (Nasdaq: DISCA, DISCB, DISCK), is the only upscale men’s cable network that focuses on thrilling automotive for its viewers. Velocity programming is diverse, intelligent and engaging, capturing the best of the human experience as told by the top experts in the field. Formerly HD Theater, the fully HD network is available in 63 million homes. For more information on Velocity, please visit Velocity.com, on Facebook at facebook.com/VelocityTV or on Twitter @Velocity.